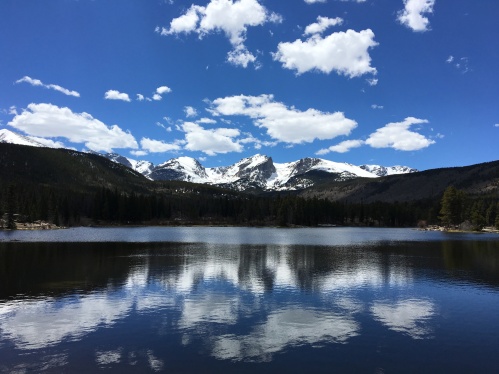 Our goal for the day was to find bluebirds and spring wildflowers.

We always start our birding adventures in the park by stopping at the Alluvial Fan picnic area. In that one place, an open forest of aspen and Ponderosa pine at the foot of steep rocky walls, we saw and heard: ruby-crowned kinglets, robins, magpies, ravens, Stellar’s jays, yellow-rumped warblers, pygmy nuthatches, a brown creeper, broad-tailed hummingbirds, mountain chickadees and downy woodpeckers. We watched as a pair of mountain chickadees cleaned wood chips out of a newly-excavated cavity in the trunk of an aged aspen. The downy woodpeckers, who must have done the excavation, tried to fend off the chickadees with loud, scolding calls and threatening attacks, but it appeared that the chickadees won. We could have gone home completely satisfied with our birding experience at that point, but we were still on a bluebird quest.

The park was filthy with ruby-crowned kinglets though. Everywhere we stopped we heard their distinctive complex song. It starts out soft and slow then builds to an incredibly loud and rapid crescendo – quite impressive for such a tiny bird!

Elk had separated themselves in male and female herds. The males’ velvet-covered antlers were still in the growing stage, and they had not yet lost their winter hair so they looked a little ragged. The females, on the other hand, were sleek and proud-looking. We did not see any elk calves, but surely it won’t be long before they are born. 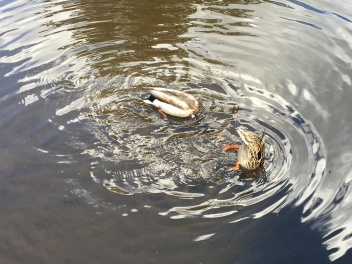 Still no bluebirds, but hummingbirds buzzed all around us.

Finally, at Beaver Meadows – mountain bluebirds, looking, themselves, like pieces of the sky. The meadow had several large exclosures surrounded by too-high-for-elk-to-jump fencing. Perched on the top of fence posts, male and female mountain bluebirds scanned the grass below for insects. YAY!

Spring flowers were still scarce. Mountain ball cactus was blooming – a real treat – as were field chickweed (mouse-ears) and tiny bunches of sandwort and bluette, but pasque flowers were not be found. 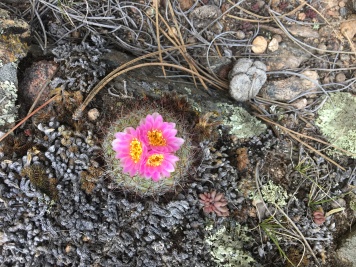 Trail Ridge Road was open only to Rainbow Curve since snowbanks along the roadside were still a few feet deep. We are definitely pushing the “springtime in the Rockies” envelope.